A Call From The President

At around 10:30pm a few nights ago I received a WhatsApp message from The President of The Magic Circle Scott Penrose requesting to speak to me on the phone as soon as possible. As anyone would assume when receiving a message at that hour I assumed I had done something wrong and was in the s**t. His second message received a few seconds later assured me it wasn’t anything bad, just a rather pressing matter.

A few minutes later we were on the phone and he informed me that he had just left a council meeting at The Magic Circle where he had let them know that he was promoting me to A Member of The Inner Magic Circle with Gold Star (M.I.M.C). I was absolutely flabbergasted, and genuinely did not see this coming.

The Magic Circle has three levels of degree, M.M.C, A.I.M.C, and M.I.M.C, when I first joined The Magic Circle a decade ago, I went in as an M.M.C, in 2013 I took a performance exam and was promoted to A.I.M.C, however the top level that I became a member of this week, can only be bestowed upon a magician by the current President and is completely at his discretion and his alone. M.I.M.C members are limited to 300 worldwide, other notable magicians with these initials after their name include David Copperfield, Dynamo and Derren Brown.

It is a dream come true, I ever believed I would ever be bestowed this honour especially while I  am still in my 30’s. Thank you Scott! 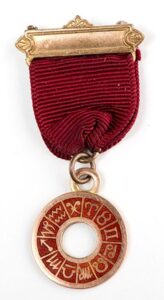 A Member of The Inner Magic Circle with Gold Star Badge