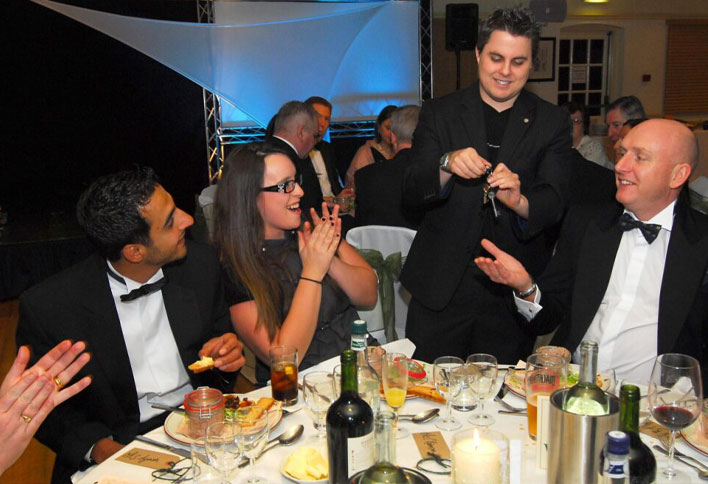 If you have a party or event coming up in Portsmouth and really want to break away from the norm when it comes to entertainment, Richard Young can offer the ideal magical solution. You know that your guests want to see something exciting and different and that’s exactly what Richard Young offers. Richard Young is a leading Portsmouth magician providing fantastic Close-Up Magic entertainment for any private or corporate event, and he is also a full member of The Magic Circle, you can rely on Richard Young to deliver an extraordinary magic show right under your guests noses which they will remember long after the event in Portsmouth is over.

Richard regularly performs his magic all over Portsmouth and is often booked at Fratton Park to entertain the VIP’s when Portsmouth FC are playing at home. Richard has also performed in the Solent on the spectacular Spitbank Fort resort and also at the Portsmouth Park Hotel and Portsmouth Marriott.

One of the major benefits of a Close-Up Magician is that they can adapt to any event and provide a fantastic evening of up-close entertainment which has a personal touch. When people see a Close-Up Magician for the first time it is an amazing experience. Richard Young has spent many years honing his skills and developing his extensive collection of tricks and techniques, and will provide a show that truly wows everyone and will keep them guessing about how he managed to pull off the amazing illusions. Richard Young can perform while your guests are having drinks, provide a full stand up magic show, or casually move between tables throughout the evening during the meal – the choice is yours. Whatever kind of show you opt for, you can be certain Richard will truly take your big event up a notch and give everyone a night to remember.

Portsmouth Magician Richard Young has a selection of entertainment packages designed to meet the requirements of a varied range of events in the Portsmouth area including weddings. Richard Young regularly perform at weddings in and around the Portsmouth area. Richard is at home in a marquee, a traditional venue, aboard a boat or in any other setting, his close-up magic can be adapted for any event or occasion, even a wedding at home in the garden. Richard performs during the arrival drinks reception and also around the tables during the wedding breakfast. Portsmouth Magician Richard Young’s Close-Up Magic is one of the few forms of entertainment you can book for a wedding that works for all ages and nationalities.

Portsmouth Magician Richard Young is personable, witty and friendly magical entertainer. He never offers anything less than the highest quality performance and commitment with his magic. His show can be adapted and adjusted to any event, and he will always make sure the material is appropriate for your guests whatever their age or background.